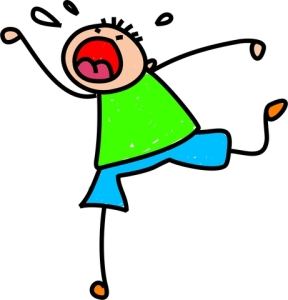 Three-year old Jake was desperate to play with his older sister and her friend, who were setting up an family camping outing with their Playmobile toys. He had played alone since lunchtime and wanted to be part of the fun. The girls had just gotten the campsite set up, having placed the toy family at the campfire, when Jake asked to bring in his favorite toys, a gang of dinosaurs. But the girls saw no place for the dinosaurs in their story and told Jake, “no, leave us alone!” Jake turned bright red in the face, did all he could to contain his tears, and then lashed out. With repeated kicks left and right, he proceeded to destroy the entire, elaborate scene that they’d spent hours putting together. Pieces of the girls’ camping haven were now scattered in every corner of the room. Jake stood there fuming, glaring angrily at the girls, and looking helpless and defeated.

As a parent, how would you deal with Jake? Would you punish him by putting him in time out? Or yell at him to stop bothering his sister? Perhaps you’d tell him, or the girls, to be “nice,” or else…? What other choices do you have?

With the understanding of why your child has tantrums, you could take a more proactive stance. In most cases, the child having a tantrum is totally out of control and needs your guidance. In full-blown tantrum mode, the child’s upper level thought processes are entirely off line. He has lost the use of his cerebral cortex, the part that gives him the ability to think, be flexible, and express his feelings. Utterly dysregulated, he doesn’t know how to deal with the big emotions he’s feeling, nor does he have the tools to ask for what he needs. He needs your help to soothe his distress.

“When your child is at his worst, that’s when he needs you the most,”
– Daniel Siegel, No Drama Discipline

Try to remember this the next time your kid drives you crazy. Your connection with your child comes first, and, besides protecting him and others from harm, and keeping property intact, this is more important than anything else. The upset child is in a reactive state: his “reptilian brain”––the part that’s wired for fight, flight, freeze or faint––is on alert. He can’t listen to reason or logic. By approaching with an empathic and nurturing attitude, you can help soothe out-of-control emotions and lead him to a calmer state where he can experience self-control.

Through your gestures, body language, and facial expressions, you can show him that you really understand and feel his distress. This might mean quieting your voice to a warm, friendly tone, giving a gentle touch or a hug, sitting down on the his level, and softening your facial expression. You might gently pick him up, rub his back, and soothe him, letting him know that you get how much it hurts. All of these gestures signal to your child that he is safe and he is not alone. You are setting limits of physical safety by preventing him from harming himself or others, or from damaging property. This helps re-integrate the brain, which means he’ll have moved from being reactive to being receptive, and will be able to use some higher level thinking.

When he’s calm enough to look you in the eyes, you could use a few quiet, empathic words to show you get it (i.e., “you really wanted them to let you play” or “you felt left out”) and go on to redirect him about asking for what he wants by telling him something like, “you can say, ‘I want to play, too.’” By connecting in a soothing way, you’re training his brain to self-regulate, to cope with anger and frustration. You’re helping him regain self-control. As a result, he’ll be able to listen to the limits you’ve communicated to him and absorb the message (i.e., “kicking your sister’s toys is not respectful. You can tell her you’re sad she’s not letting you play”).

By being there for him emotionally, you give him a foundation for learning upper level skills such as sound decision-making, emotional regulation, personal insight, flexibility, empathy, and morality. These skills, which he’ll need to enjoy a balanced and meaningful life and healthy relationships, are governed by a part of his brain that won’t fully mature until he’s in his mid-twenties!

So, the next time your child throws a big, messy tantrum, keep in mind that you are a co-builder of your child’s brain. Jump in and connect with him emotionally. You’ll not only be teaching your child to self-calm and make positive choices, you’ll also be deepening and strengthening your relationship with him.

To your joyful parenting!