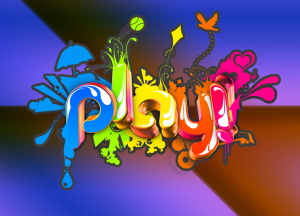 Very excited to share the results of recent workshops and lectures, and until then, please enjoy this great article on the VALUE of PLAY via National Public Radio!

Brains at Play on NPR!

“This week at NPR Ed, our series Playing To Learn will explore questions about why people play and how play relates to learning.

Why do we humans like to play so much? Play sports, play tag, play the stock market, play duck, duck, goose? We love it all. And we’re not the only ones. Dogs, cats, bears, even birds seem to like to play. What are we all doing? Is there a point to it all?

The scientist who has perhaps done more research on brains at play than any other is a man named Jaak Panksepp. And he has developed a pretty good hypothesis.

In a nutshell, he, and many others, think play is how we social animals learn the rules of being social. Sort of counterintuitive when you think about it: Play is how you learn rules.

In fact, play seems so deeply wired by evolution into the brains of highly social animals that it might not be a stretch to say that play is crucial to how we and they learn much of what we know that isn’t instinct. In one experiment (not Panksepp’s), kittens deprived of play still could hunt perfectly well when they grew up, but they couldn’t read other cats’ social cues — they jumped to aggression much more quickly than normally raised cats.

Not surprisingly, Panksepp and others think the lack of play is a serious problem. Especially at younger ages. And particularly in school settings. Without play, we know that other species become quick to aggression and have trouble “fitting in.” Panksepp thinks the rising rates of ADD and ADHD may in part be due to this problem. In trials where extra playtime was given to kids showing signs of these disorders, there was marked improvement in their behaviors as reported by teachers and parents.

“It’s not just superfluous,” says Panksepp. “It’s a very valuable thing for childhood development. And we as a culture have to learn to use it properly and have to make sure our kids get plenty of it.”