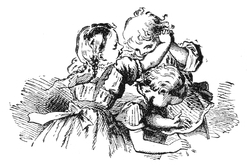 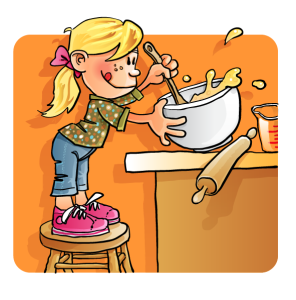 This Sunday morning, 6-year old Mary Sue got up well before her parents, so excited to be making them breakfast––”the best-est, special-est breakfast ever!” she thought. From the frig, she got out all the yummy stuff she could think of, eggs, olives, pickles, ketchup, and salsa, dragged out the step stool, and climbed up get a big mixing bowl from the cabinet. As she yanked the bowl out, it slipped out of her small hands and came careening down, knocking over the egg carton on its way to the floor. There was a huge crash as the bowl shattered on the kitchen tiles. Mom and Dad arrived in the kitchen rubbing their eyes and saw Mary Sue standing in the middle of a big, gooey mess. Broken eggs and ceramic shards were everywhere. “I didn’t mean it! I didn’t mean it!” Mary Sue was bawling, “I wanted it to be a surprise. Now it’s all ruined!”

Well, if you were her mom or dad, what would you do? Of course, above all, you’d be concerned for your child’s safety. There’s broken ceramic all over the floor. And, admittedly, you’re upset that there’s this monstrous mess! You wish your daughter had just slept a bit later, or maybe, just maybe, would have thought to ask for help. On the other hand, you value her independence and love the fact that she put so much effort into trying to do something special for you.

If your goal is to teach your child to take responsibility for her behavior, you might give Dr. Becky Bailey’s STAR approach a try:

When you’re relaxed and calm, you can see things more clearly so you don’t let your surprise and upset get the better of you. It becomes more clear that your child was simply acting like a child and not deliberately trying to push your buttons. Your calmed state of mind allows you to connect emotionally with your child. Coming from a place of mindful awareness, you become a role model for composure––showing her it’s possible to deal with distress without losing your cool.

On the other hand, had you chosen to do what many parents do automatically, which is to scold, criticize, or punish, you’d be triggering your child’s survival mechanisms. Questions or commands such as, “why didn’t you ask me for help?” “what on earth do you think you’re doing?” “how come you’re always making such a mess?” or “you’re in time out! go to your room right now!” only feed into the fight, flight, or freeze reaction. What you’ll get is your child screaming back at you, defending herself, running off, or shutting down and turning her fury inward at herself. This latter reaction can cause a life-long pattern of anxiety, depression, and low self-worth. Your aim is not to provoke feelings of incompetence, guilt, and shame, but to encourage creative problem-solving. Ultimately, you want to get her into a calmer, more rational state so she can learn to make good choices, even in the most challenging situations.

Rather than give way to those rote reactions you learned from your parents, and your parents learned from their parents, you have a choice! You can make a conscious effort to boost your child’s sense of personal competence by creating an emotional connection with her. Once this connection is made, right brain to right brain, she’ll be reassured that she’s safe, physically and emotionally. Keeping a kind, soft expression on your face, holding her in a reassuring way––if she’s open to being touched––or, possibly, just placing a hand on her shoulder or back, you are showing her, in no uncertain way, that you’re there for her, no matter what.

Best of all, you’re calming your child’s reactive state so she can get her rational brain back on track. You’re helping her use those upper level thinking skills that allow her to solve problems logically. With your support, and once you’re grounded in the present moment using the STAR method, your child can become more cooperative while acquiring skills that will help her have a happy and successful life.

To your joyful parenting!